Written by TMG on January 15, 2014. Posted in Web Development

Back in the 90’s, it was simply cool to have a website, even if the site contained barely any content.

This was, in it’s time, a very good promotional site for The Lost World: Jurassic Park. Not too much going on homepage-wise…

In the early New Millennium, everyone basically wanted busy, content and image-heavy sites, with loaded home pages and lots of stuff in general. Probably why some MySpace profiles went this direction: 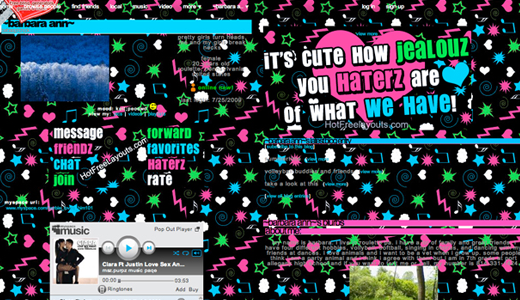 Is “busy” the right word?

Now, home pages tend to encourage site navigation, while content and images have slimmed down, sticking to necessary info. But, what does this mean insofar as the title of this post is concerned?

Obviously, if you are a webmaster, designer, social media coordinator, content manager, etc., you control the “genes,” to some extent. You can try new things and it’s up to your users to decide whether or not they like the changes.

However, you can get ahead of the benefit / harm step by doing the following: use the internet a lot and identify things that really annoy you about websites, Facebook pages, etc. Keep a note of these things and simply fail to apply them to your business’s web outlets. No sense trying things that you don’t like.

You might respond by saying, “Isn’t this a bit obvious?” To which I’d respond, “Probably not,” the reason being the frequency at which I see anti-functional, mind-boggling and otherwise annoying aesthetic, navigational and marketing tactics on the web. I really don’t think that people keep track of things that make using websites difficult. If they did, they’d avoid using such tactics on their own sites.

To some extent, though, it comes down to how often we proactively utilize web media. It’s easy passively browse the web, but as various pieces in the web creation process, our passive use of the internet doesn’t exactly help anyone. This brings to mind a certain New Testament passage: all things are lawful, but not all things are profitable. Ergo, it’s certainly okay to browse sites and social media without thinking, but it’s probably not going to help you or anyone else.

Some things to look out for:

So, keep using the internet, but keep track of things that get on your nerves. Then, as I said above, fail to apply those annoying things to your various web presences.