Written by TMG on February 3, 2014. Posted in Entertainment, Social Media

Super Bowl 48 ended up being rather dull insofar as we’re concerned. Although we were met with one of the better halftime shows in recent memory.

But, being a social media company, and being rather personally obsessed with marketing, let’s talk about the ads. And, let’s keep in mind that “ads” doesn’t just mean TV commercials any more – twitter was pretty huge during the game (even if there wasn’t much to tweet about).

Everyone was tearing apart JC Penny last night for their misspelled tweets. The CNN homepage even knocked the department store for its spelling flubs (see middle text to the right of Mr Namath): 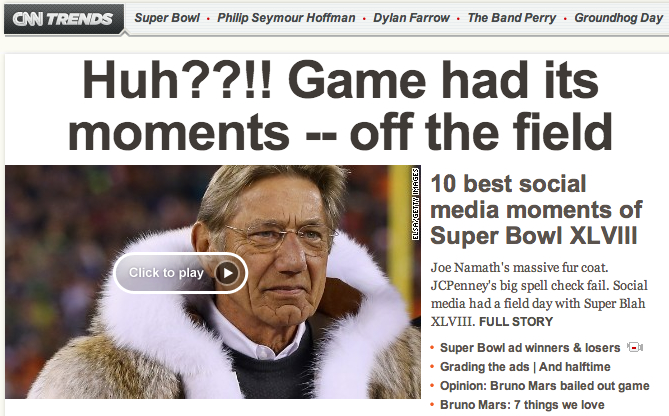 Of course what CNN doesn’t seem to get is that the errors were done on purpose in a proactive attempt to go fail-viral – they were typing with mittens. Genius move: everyone likes to make fun of mistakes. It got JC Penny some attention and made all of the little correctors get an advertisement they weren’t planning for.

Maserati’s ad for their new Ghibli was beautiful, interesting and, to many, confusing or out-of-place. If you look at the “Worst Super Bowl Ads of 2014” lists around the web, this one is usually number 1. However, I really liked it. I don’t have $60k to spend on a car, but I think that the people who do (and who “got” the commercial) would respond to this ad. You have to understand, many of these luxury brands avoid mass appeal in favor of targeting the sorts of people who they want to buy their products. Maserati has succeeded in that here:

Or did they? I guess we’d have to ask those with 6 figure salaries to let us know.

Any ad that you see in a list of either best or worst is still a good commercial. After all, someone remembered it and published content about it on the web for more people to see. That’s why Maserati, Go Daddy, Chrysler and company are going to be just fine.

So, the worst ads are the ones that you don’t remember. Any ad that no one has blogged about… that’s the one that will get the lowest ROI, and therefore the ad that will have lost the company the most money. That’s why you’ll notice that I haven’t posted any videos here. Because, by doing so, I would negate the purpose of this section of the post.

I can kind of hear Taps playing for these commercials, which have passed away from our memories and into the graves of their various companies’ budget deficits.