Written by TMG on May 6, 2014. Posted in Search Engine Optimization

Almost anyone who searches the internet uses Google. A handful of people use Bing or Yahoo – and these people probably use Google too. Most people avoid other search engines because they don’t offer anything more than Google, and their user interfaces are so cluttered and ugly. 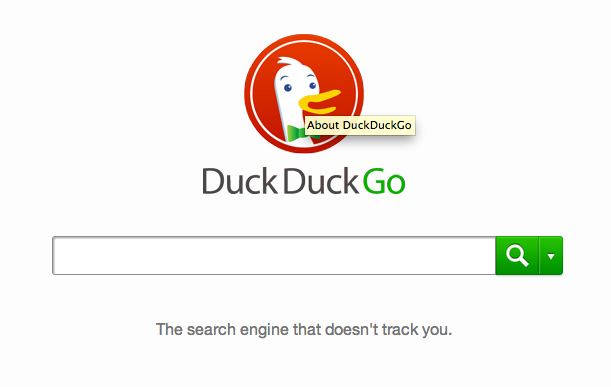 Yes, the name isn’t simple and chances are that you haven’t heard of it. You also probably haven’t played the children’s game “duck, duck, goose” in quite a while either.

But, none of that matters, because DuckDuckGo – as annoying as it is to type – actually offers something that Google doesn’t. Two things, in fact: privacy and freedom.

You can read specifics about these benefits on the DuckDuckGo about page. The privacy factor should be enough to get anyone involved. How nice would it be to search the web without your searches being tracked, recorded or otherwise viewed by robots, other people or marketing companies?

In the future, I will probably have more to say about DuckDuckGo. I’m not too sure about their ranking algorithms, which is a key factor in how usable the site actually is (especially from an SEO perspective). Furthermore, when a user sacrifices privacy in Google search, they also get results catered to what they like. For some, this is a good thing, for others, it’s really not.

For now, I encourage you to try DuckDuckGo when searching. How does it compare to Google? Do you find the information that you need? Let us know in the comments if you give it a shot.

Find me on Google