Getting “In Phase” with the SEO Tide

Written by TMG on May 15, 2014. Posted in Search Engine Optimization 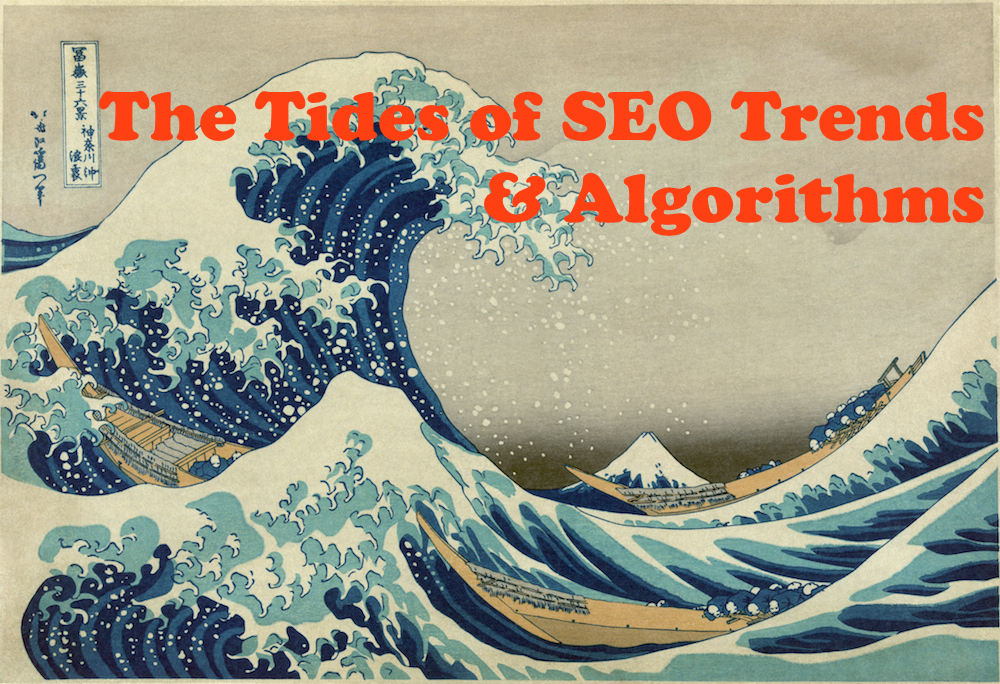 I was trying to think of a metaphor with which to compare SEO “trends” in this post, and I figured that the ocean tide is probably the best example. Tides come in and out on a scheduled basis due to the water’s reaction to gravitational forces. SEO “trends” go in and out (on a much slower basis) based on the force of Google algorithm updates, which are also reactions to the force of web trends, spam trends and discoveries in algorithm loopholes.

What’s First: The Chicken or the Egg? 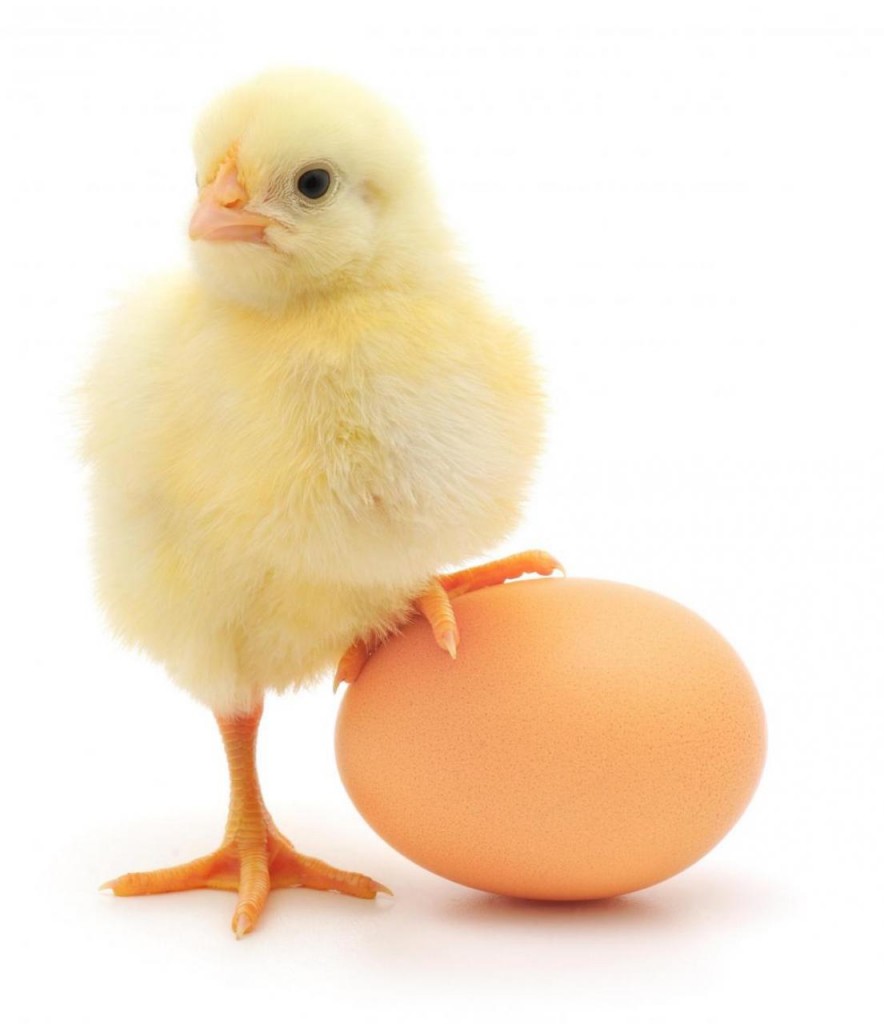 Unlike the cliche above, it’s kind of obvious what started this cycle: Google’s original algorithm and popularity. In the “old” days of SEO, people figured out that Google based algorithms on more than just the on-site content alone, but on inbound links from other websites. Furthermore, they based rankings on the density of keywords per page, making it easy for SEOs to react with what we now know as “black hat” methods.

So, if Google’s original algorithm was the egg, the first chicken was black hat SEO. People simply farmed for thousands of links and hid keywords in the on-page content, which could trick the search engine into thinking that a page concerning diet pills was about whatever the most topical celebrity was. You could liken this to the hashtag hijacking that we discussed yesterday.

Clearly, that’s not so good for Google’s product. They want to return relevant results, so, they tweaked algorithms to disregard certain kinds of links and to recognize spammy black hat tactics. So, SEO had to change.

Granted, this sort of thing doesn’t all happen at once and certain waves of optimization tactics come in and out at different times.

As benevolent SEOs – or those who optimize websites to give search engine users what they actually want to find – we have historically had at least two methods in which we can choose to operate: apathetic and reactionary.

The apathetic method involves ignoring Google’s updates in favor of outmoded trends. In other words, these SEOs (typically DIY business owners or stuck-in-their-ways agencies) assume that the methods that used to work will continue to work. Sometimes, this method sees success. But, it has little to no longevity, as your rankings will eventually plummet and you will have to go on to the following method.

The reactionary method is definitely the most common – if not the only method in use today. You listen to Matt Cutts (a Google engineer from whom SEOs seek sage advice) after noticing penalties of various sorts in your organic rankings and make changes in your tactics based on Google’s algorithm updates. Sometimes we don’t even see penalties for our outmoded tactics, so we jump the gun, make changes, submit websites for re-indexing and see that our websites have survived updates.

Okay – So, what about that “Tide” Metaphor?

I’m getting there. First, let’s look at something else that has to do with waves: 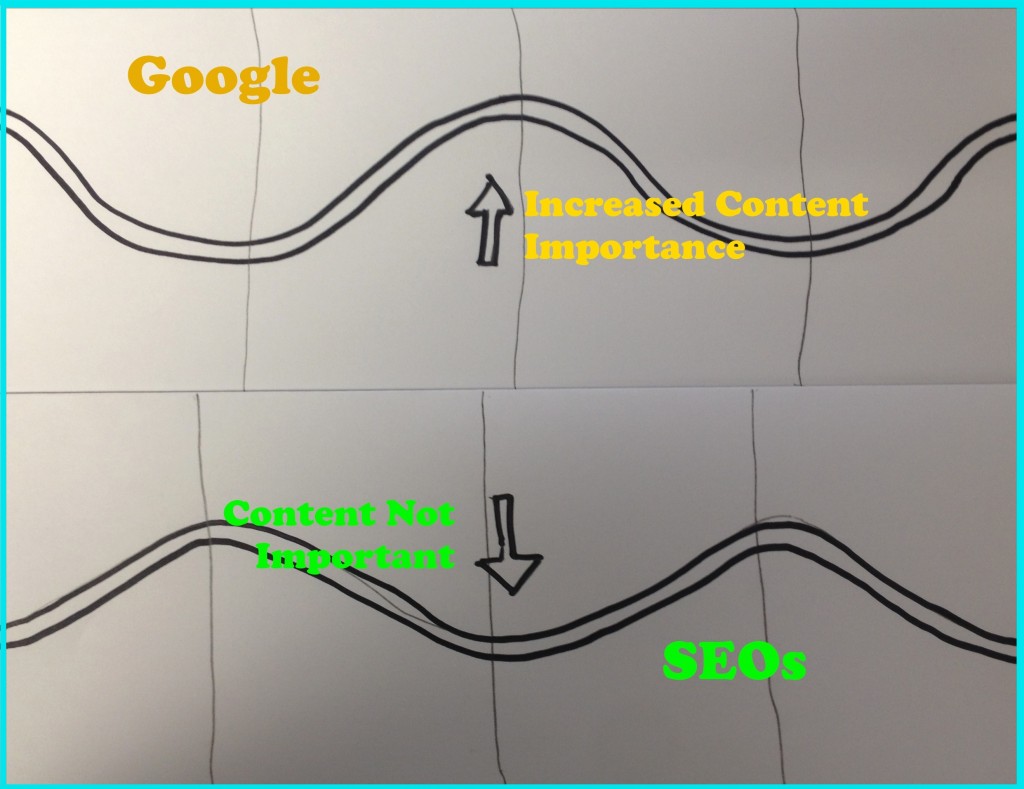 Yes, this beautiful graphic was hand drawn by yours truly – with love.

Let’s consider the above horizontal axis to be time, while the vertical gauges relative “importance.” For the sake of illustration, the graph assumes that the importance of content, as it relates to SEO, has increased and decreased throughout time.

Clearly, this graph is a representation of the reactionary method. At the time when Google decides that content needs a boost in importance, SEOs don’t seem to agree. So, what’s the result? Sites get penalized and everyone scrambles to get love from Google again.

So, to consider our “tide” metaphor – let’s say that benevolent SEOs are surfers, Google algorithms are the waves and overemphasis on algorithm loopholes is the gravitational force.

Surfers know when the tide is going to be too low for surfing. I’m no surfer, but I don’t think they care too much about the earth’s position as it relates to the sun and the moon. The tide does depend on gravity, but surfers don’t need to worry about that, do they?

The point is – surfers know when to surf. They have a pretty good relationship with the water. So, is there any way that SEOs can coexist with Google? After all, I doubt that any surfer likes showing up to a waveless beach.

There has to be a better way to do SEO

The apathetic method doesn’t work. The reactionary method causes stress for SEOs, business owners and anyone involved. So, there has to be a better way to coexist with Google.

I think that there is… The predictive method. And no, I’m not saying that we get out our crystal balls and practice clairvoyance for our clients.

Rather, let’s consider a few other factors on which Google might update the algorithm:

All of this is to say that the predictive SEO method takes a holistic approach to its relationship with Google. By focusing solely on Google’s reactions to widespread SEO techniques, you basically force Google to react to yourself. However, by focusing on how Google should conceivably react to web trends, development advancements and their own failures, you basically end up in a groove where, like the wise surfer, you simply know what Google will do before they do it.

So, the timeline ends up looking more like this: 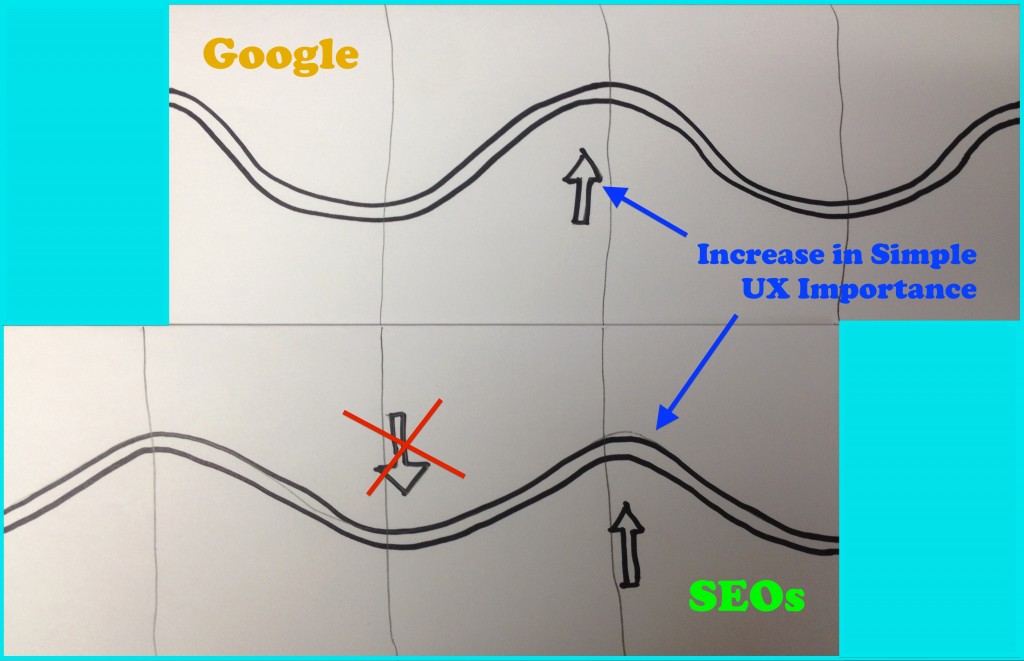 In this illustration, I went with simple UX (user experience), as it is a trend across the web that seems to both win awards and work for users. Right now, I don’t think that Google has any specific algorithm catering to bumping up a well-crafted all scroll / little-to-no nav. site. But, considering the popularity of these sorts of sites, I’d expect Google to account for the trend in the future. So, by encouraging developers to build sites in this format (among others) and applying optimization methods to these simply-designed sites, SEOs can align their priorities with those of Google.

In physics, this is known as being “in phase.” Interestingly, when this occurs in sound waves, so does amplification. However, when slightly or completely out of phase, sound gets obscured or even cancelled out. Think of this illustration as it relates to SEO and Google, and you can see how the efficacy of web search gets obscured for users when SEOs and Google don’t align.

What, then, should SEOs take away from this?

It’s easy to look at new site layouts and assume that, because current SEO best practices don’t seem to work with them, these will make for bad Google rankings. However, if a layout is very popular, and it encourages good user experience, then you can probably assume that Google will account for this at some point.

So, right now the big thing in SEO is content. Clearly, Google doesn’t like slim content – plus they seem to give precedence to site with fresh, original and helpful content. So, that means we should spam Google by employing 24-hour writers to cook up long, relatively idea-less articles to throw up on sites every day?

No! Continue to create content at a reasonable rate that users will actually engage with. Otherwise, all that you do is produce spam and cause that “importance” wave to fluctuate even more.

This goes along with the previous point, and has more to do with perspective than practice. Your philosophy needs to center around making things easier for the user before making your rankings better. Yes, in the end, your rankings improve due to positive user experience. However, focusing your philosophy on rankings will cause you to take shortcuts, seek loopholes and, in the end, create problems.

Development, design, social media, new forms of information curation… the list goes on. Know what’s going on around the internet as a whole, because you can guarantee that the guys over at Google see it all. SEO isn’t all meta tags and links anymore. Soon, it won’t just be content. SEOs need to take everything into account, which makes their jobs more difficult, but it pays off in the end.