Some Stats on our little April Fools Prank

So, who got out to see the Spiderman shoot yesterday?

Alright, sorry if we got you with our April Fools joke. Also sorry for following suit with other companies who start their pranks a day early (Google, for example). But, maybe some of the stats will show you why you should get in on April Fools next year. 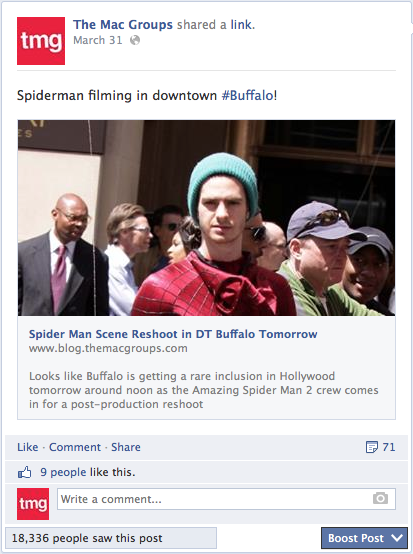 That is how our Facebook post looks from our point of view. We had 9 likes on the page, but notice the 71 shares. Each share has a varying number of likes, comments and more shares, growing the visibility to an exponential level – as of now over 18,000 people have seen our post. That’s 18,000 people who have had the opportunity to see our brand name, url and logo.

Being a small company working mainly in the WNY region, our blog mainly caters to clients who want more knowledge about the inner workings of our various services. So, our audience tends to be relatively small. Therefore, from January 1 to March 30, we had 787 visits and 460 unique visitors.

In less than 3 days, we’ve had triple our YTD visits and had six times the amount of unique visitors. However, notice the visit duration and bounce rate… Very poor. 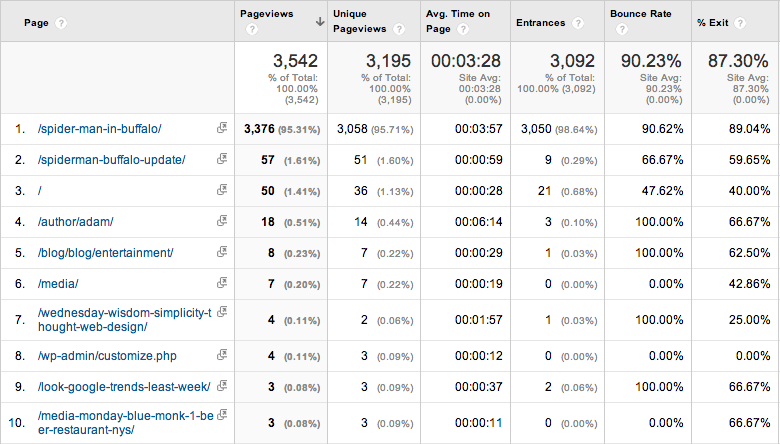 “/spider-man-in-buffalo/” is the original post and “/spiderman-buffalo-update” is the reveal that the news was a joke. Notice that for 3,058 separate people, the visit duration was almost 4 minutes. That’s high for almost any sort of content. That incredibly high for a page with only 226 words.

What’s more interesting? How about the traffic sources:

Facebook would be the most obvious source for visits on this post. What I wasn’t expecting: ComicBookMovie.com and Wikipedia.

As it turns out, some web users will not only believe close to anything, but they will even include your fictitious content as a source throughout the web (even after the content says “April Fools” at the end). It appears that the Comic Book Movie site has since removed the article and link to our blog, but Wikipedia’s monitors haven’t made it around as of this blog post.

While Twitter was certainly the platform with the least engagement, we still definitely got some traction: 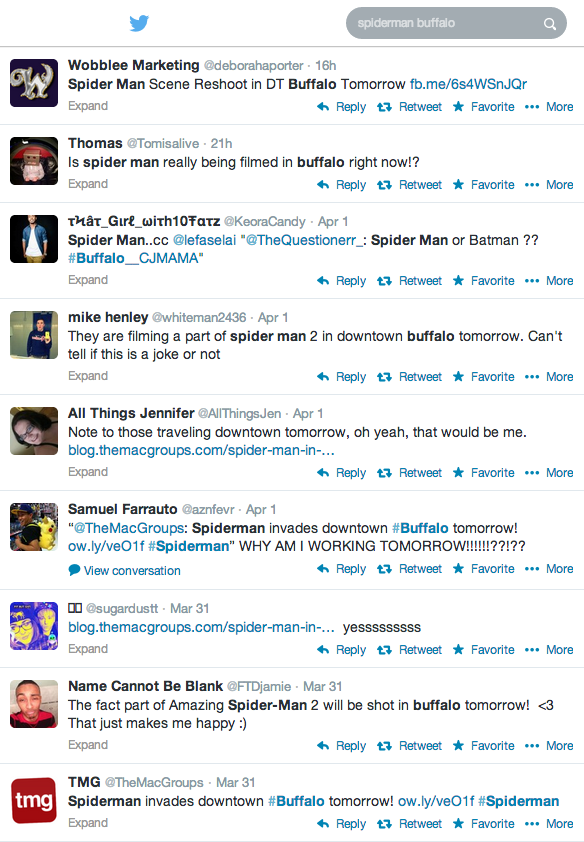 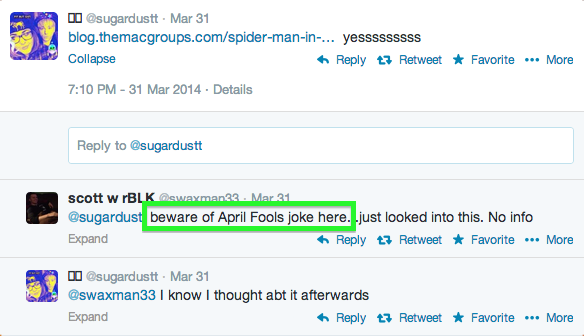 That being said, the 33 visitors from Twitter remained on the page for quite a while:

But… Did it do anything for us?

After all of these statistics, did it even make sense to do this little stunt? Sure, 18,ooo people saw the Facebook post and well over 3,000 people visited the blog article. But, did it do anything for The Mac Groups? Well, I can think of at least three positive outcomes:

I don’t know much our visitors know about human psychology. To tell you the truth, I’m a layman as well. However, I know a few things, one of which being that people technically never forget anything. Our ability to recall memories is an entirely different subject. But, when the eyes, ears, etc. receive information, that information never gets lost.

Therefore, in the past few days, 18,000 people have seen The Mac Groups logo, name, etc. They know that we have fun, or else we wouldn’t either talk about Spiderman or April Fools, and they might even know that we do social media marketing.

Furthermore, while the vast majority of people visited our website to find out where to see some famous Hollywood personalities, some of them browsed our blog posts, website info, etc. When a prospector goes out for gold, chances are, they are going to sift through a pan of 100% dirt. However, the chance to find some gold is worth the time, energy etc. I guarantee that we used far less energy to put up the April Fools post. Even though far fewer people navigated further into our website than visited our post – more browsed through than usual and that would be the proverbial gold.

I’m not too sure how I feel about a joke being used as a source for anything, Wikipedia included. That being said, we still ‘earned’ the link that we received on the Wikipedia article for Spiderman 2. We created some content that thousands of users viewed, shared, etc. Social media is about a lot of things, one of the greatest being entertainment. April Fools is about one thing – playing pranks. We accomplished both, so any links were ‘earned.’

These links work toward better SEO. Plain and simple. If they get removed, does that hurt us? No. But, they exist currently and they work in our favor until and unless they get taken away,

Showed How to Engage Users

Lastly, and most importantly, this has shown us a great way to engage people. Many of our clients struggle with the concept of engagement, which is totally understandable. It’s difficult to come to grips with the idea that we should avoid branding, company info and the like in favor of pure entertainment sometimes. And, yes, many purely entertaining posts will either go nowhere or they will result in many views and no business. However, you must have a long run perspective. Certain users might turn into customers one day. Furthermore, as you continue to post entertaining, engaging content, you gain a following. People comment, like, share, etc and begin to trust you as both a source of entertainment and an expert in your particular industry. Then, when the day comes that they need flowers, surgery, legal counsel or food… they know who to go to.